Longborough is a delightful village set between 450 and 784 feet up in the Cotswold Hills adjacent to both Stow-on-the-Wold and Moreton-in-Marsh which each lie about 3 miles distant on the Fosseway, that wonderful Roman Road that links Lincoln with Exeter.

The last census in 2011 recorded a population of 471.  The demographics of the village have been a balanced mix of residents, holiday cottages and second homers.  These last holding on until they can find a way of being full-time residents – Longborough is a friendly village!  Just recently there has been a trend towards a higher number of holiday cottages and second homes but the strong sense of community has not been lost.

Looking at the statistics as collated for the village it would seem that although the average age in the village is a little higher than the National Average its health rating is, surprisingly, better.  Residents are better educated than the average English citizen and unemployment is lower than average.

One of the attractions of the village is that it is one of the few that has the Big Five.  Thus a church, pub, school, village hall and community shop.  In addition there is the wonderful seasonal Longborough Festival Opera.  Longborough has its own Cricket Club and grounds, linked with Sezincote and has recently completed building a new pavilion. There are website links to all of these. After the Second World War it became known for high quality building work and still retains a small industrial estate on the Eastern edge of the village. 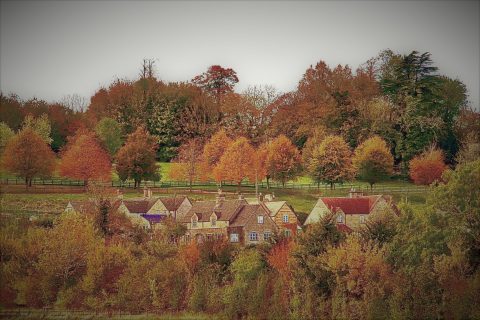 It is an active village supporting regular events  – village fetes, a scarecrow trail, Christmas Tree festival, 5-a-side village cricket, open gardens, fireworks on bonfire night and so on.  However it is not large enough now to support the WI and Gardening Club as speakers fees have become prohibitive.  Nevertheless the village hall is regularly booked for a variety of activities and private functions and even has its own snooker room and table tennis tables.

Longborough lies under Ganborough Hill where the first settlers built their long barrow five thousand years ago. The nearby quarry has yielded human bones as well as those of a dinosaur. At the other end of the parish beyond the Fosse there was a Romano –  British village. At the time of the Doomsday Book, 1086, there were three manors in Longborough, the largest of which belonged to the King.    Two became combined and, early in 13th century, became the property of Hailes Abbey until 1539 when, at the Reformation, it became the property of Thomas Leigh, a former Lord Mayor of London.    The manor remained in the family until 1921 when the estate was sold.    Most of the older houses in the village form part of the former Leigh estate.    The other manor, Banks Fee, still retains its identity as a separate estate.       In the 18th and 19th centuries Longborough was a typical farming village with the usual attendant tradesmen and shopkeepers.

There a number of attractions for visitors to look out for: the church has several points of interest including a unique regency window and along the High Street is the Ashwell Spring by the green.  Have a coffee in the shop (opening times on their website) and purchase the booklet ‘Linger Long in Longborough’ to extend the pleasures of your visit. 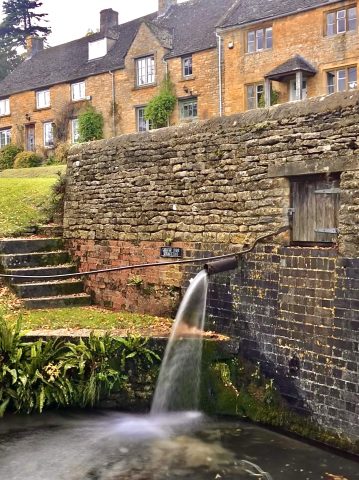 Ashwell is an ancient name deriving from “Aesc’s Well”.    Aesc was probably an Anglo-Saxon settler who discovered water on the site, which was eventually incorporated into the manor of “Langeberge”, the early name of Longborough.

The name survived over the centuries, eventually becoming “Ashwell” as we know it to-day. It became the source of the village water supply, and the “water works” were housed behind the small wooden door in the wall above the water splash. This door could only be opened by a key kept by the Chairman of the Parish Council.  As well as villagers filling up their buckets for their daily supply of water, the farmers would bring down their horses and carts to fill up.

When Longborough was connected to the Thames Water mains supply the old water works became redundant, but people still continued to drink the water up to the 1970’s when it was declared unfit for human consumption.    It is one of the most picturesque corners of the village.